A project for class

I've left Berdych and Nadal fighting it out at Melbourne Park so I could share what I made today - even though it was 34c!

I'm taking over a couple of quilting groups (from next week!) and last year at the end of term, I asked the ladies via a survey, whether they'd like a project of the month and if so, what types of projects.  The answers in so far indicate it's a goer and one of the ladies gave me a pattern for mug bag that she'd like to make - and several other ladies ticked 'yes' to the question as to whether they'd like to make one too.

So I tried out the pattern (it's one of those that's gone from pillar to post, has been altered all over the place and as a consequence, hasn't been terribly well written)  Anyway, I had a crack, made copious notes (so I can re write it and change a few things myself) and produced this: 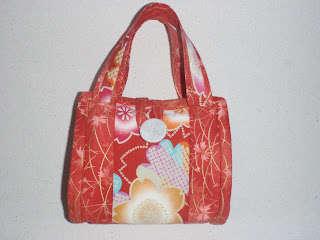 It's got pellon and wadding and it's fully lined - and not really my cup of tea (no pun intended) - the fabric has been in my stash forever and my tastes have changed -  but I'll make one more with the changes I want to make and maybe use them as a raffle prize for the classes.

.....and despite the heat, I got out a quilt that's been languishing in the UFO bin (and it's on my winter summer stitching list) and laid it on top of the long-arm ready for pinning - I don't want to pin it just yet though because I had my nails done today (first time I've had a manicure!) and I want them to stay a bit gorgeous for a bit longer..