At the beginning of June, whilst wasting time researching, I came across a Red & White challenge issued by Elizabeth. The idea was that Elizabeth would send red and white fabric to the respondants and she would later make a block for them as a thank you.  As one may have gathered, I'm a bit partial to red, so I picked up the gauntlet and made a Shoo Fly block for both Elizabeth and her friend Leisa.  These were duly sent to the US, along with a couple of pyramid purses* made with Aborigine fabrics: 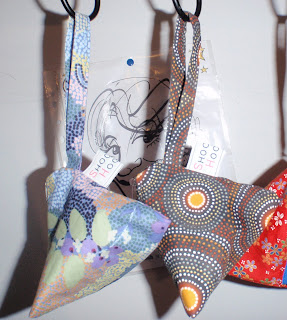 .....and look what arrived in the post this week: 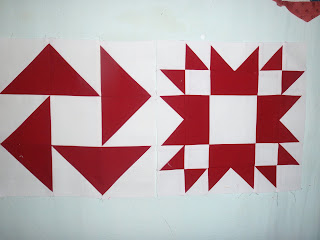 The block on the left was made by Leisa and the one on the right, by Elizabeth - these will go very nicely with the additional 2 blocks I managed to make.  In fact I liked the idea so much, I ordered more fabric from the Temecula Quilt Shop in the US (there was another reason I had to order more fabric and it involved my great-neice and a muddy dog, but that's another story) so I can a make a usable sized quilt.  Thanks Elizabeth and Leisa - they really are gorgeous.

Speaking of that great-neice - she turned 2 yesterday -she is such a wonderful little girl - she can talk the hind leg off a donkey, she's fearless, loving and full of beans.  I had already made a sampler quilt for her, which was to be her birthday present - but when I was at the Melbourne Quilt show, I bought a gorgeous little frock pattern from Nicole Mallalieu (the Tulip dress) and I've made one up for Stella 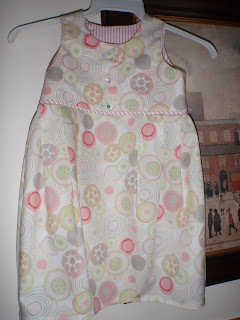 It's a little too cool in Melbourne to be wearing this just now, but a little long sleeved T underneath, and thick tights should keep her warm while we wait for summer.  I will attempt to get a photo of Stella wearing the frock at some stage.

The pattern was very easy to follow (it's got pleats, a cute little vent at the back of the skirt and buttons).  I chose to make the sleeveless version and I included the optional flat bias trim around the waist.  I also got a bit artsy with the buttons - I used some largish flower shaped shell buttons and sewed a tiny button on top, at the same time - you can't really see them in the above photo (and I used 3 different coloured centres) but suffice to say, they look really cute.

We're off to an animal farm on sunday to celebrate her birthday - hope it doesn't rain!!

*the purses were designed by the very talented Nicole Mallalieu, designer of the Tulip dress - it appears the free pyramid purse tutorial is temporarily unavailable - so keep checking back - it's easy and very, very handy
Posted by Shocking Hocking at 18:19