Spring is definately on the way - the seeds I planted about 2 weeks ago now look like this: 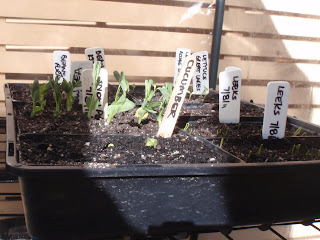 Lots of greenery has pushed its way through - leeks, cucumber, beans, sugar snaps, lettuce and one tomato plant - and we've had a beautiful couple of days of warm weather with the promise of a few more days - so that's sparked off activity in the rest of the garden.

First up, my youngest son (an apprentice builder) has started replacing the back verandah - it's actually the entrance we always use (and those who don't know us, go to the front door - so out front door is the tradesmans entrance!) and termites got into it a few years ago.  The termites have long gone but their damage has been exacerbated by the wet weather so it's got a little saggy (bit like me really!)  Three posts have been sorted out today, and a new fascia board fitted.  There's still the rest of the posts to be fixed and a couple of extended deck areas to be added, but he'll do that over the next couple of weeks.  He tells me that he'll also make me a couple of chairs and a table to put on the new bit of decking, se we can sit and have a cuppa out there - that'd be just great - and I've already started thinking about cushions and plants.  This area gets all the morning sun and is nice a shaded later in the day - and in Oz in summer, that's a good thing.  I have a huge rose bush over this entrance - in spring, the perfume and flowers are spectacular - and it has survived being hacked back out of season, being blown over by wind storms and attacked by aphids.  It's really lovely and a few years ago I propagated another few bushes and planted those in the front garden.  I'm seriously thinking of digging this rose bush out though - it will allow a lot more light into the verandah area as well as provide a much safer entrance way (it has the propensity to snag unwary visitors)  I can then plant more herbs and maybe some lettuces, so we don't have to go to the vegie patch if we only need a couple of leaves for a salad - I'd best talk it over with my dear husband before I get the rip saw out.  Having that bush out will make the whole area a lot more usable and people friendly.

While Benjo has been sawing and nailing, I've been digging up spring bulbs (which have already sent up their leaves) because they were in the spot one of the new decks it going - I've pulled up about 300 bulbs and some gorgeous deep purple irises my sister-in-law gave me.  I've replanted these in the front garden and the bulbs are still in a tub waiting for a new home - best get them in quick smart if I want to see any flowers this year.  I've also pulled up several agapanthus, ivy, another rose bush, a potato vine and lots and lots of weeds.  The chooks are in 7th heaven around the newly bare(ish) dirt and I am absolutely knackered!! I guess that's what happens when you don't do a great deal of anything physical for 12 months.  It's a good knackered though - I did despair about ever getting interested in the garden again - it took all my energy to keep the vegie patch ticking over last year - but I feel like I'm back to my old self again - albeit it with a far greater apprecition for life and what's really important.

So, in a few weeks, this should look entirely different......