Today I was supposed to be sorting out my hanging (well, laying down on the miners couch) clothes after my hanging rail collapsed - but I didn't get there at all.

I fished around in the huge bag given to me by a TT member and found some beautifully co-ordinating furnishing fabrics, cut them up and sewed them together with some linen and some hot pink polka dot fabric, to half make this..

I still take stinky photos and it doesn't look half bad in real life.  It'll end up being a flashy tote - the back and front, and the bottom is lined with a bag weight Pellon (interfacing) which means it can stand up.  It has a wide gusset so it can fit all manner of things - I just have to hand sew the binding down and put some handles on - not sure what handles I want to put on as yet, which is why it's still sitting in my sewing room unfinished.

While I pondered that quandry, I fished about in that big bag again and found a large piece of furnishing fabric that looks like linen - but doesn't behave as badly - and thought it'd make a great skirt.  So off to my paper patterns and I found this.. 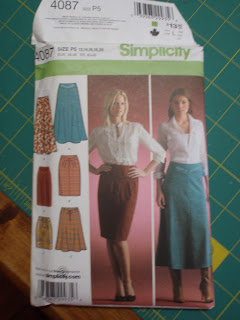 I like the shape of the blue one, not so much the style though - so I made the blue skirt out of the furnishing fabric, found a Prints Charming screen print (from a small bag of screen prints I bought at a quilt fair from Kelani Fabrics - and which is on my Winter Summer Stitching list to use on a skirt) and cut out a circle which I raw-edge machine stitched to the skirt.  I then made a bias cut striped binding which I used to finish the hem.......and voila..... 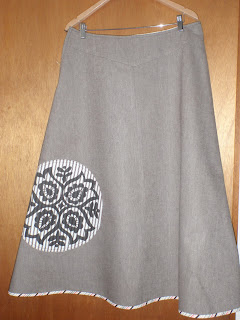 So, maybe I can sort out my clothes tomorrow.....
Posted by Shocking Hocking at 01:10