It has been a little while since I posted last - there's been quite a bit going on this last couple of weeks, not least of which was a wonderful visit by one of my nephews and his gorgeous wife - Ian and Mads usually live in Manchester UK and they took time out to travel very south after a wedding in FNQ (Far North Queensland, Oz), to catch up with family - which was just brilliant - I hadn't seen Ian since he was 15 and now here he was, with a beautiful wife too - we spent a fabulous couple of days and then dropped them off to spend their last night in Melbourne before their flight home - thanks to them both for coming south, putting up with the rotten winter weather and joining in so marvellously with us lot here - it was fantastic sitting around the dinner table on saturday night and getting on with the 'craic' - they also took 'The General' home with them as it is destined for one of my sisters, who just happens to be Ian's mum (Finona, if you're reading this, make sure to remind Ian about it!!)

I've been knitting - I've pulled it back 4 times but now it looks like this one sock will be finished soon....then onto the next (and the next pair..) 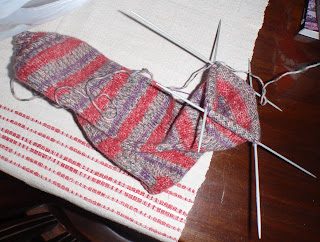 My bestie and I bought a knitting machine - and can't wait to get some time to have a decent play...


I bought a new book and it's awesome.. 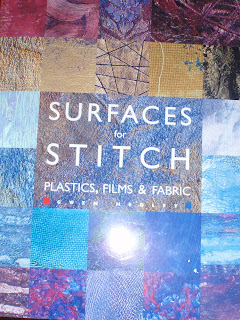 We have some new babies (who were really cheesed off when I stuck my camera with the flash under their cover) - they're too young to go outside overnight as it's still too cold - so they're making a hell of a mess inside!

...and last, but not least, some fabric I ordered in March arrived - it's called 'Garden go round' and it's really pretty - here's 3 of the bolts - there's about 9 bolts all up - and I have to get off my butt and organise selling it... 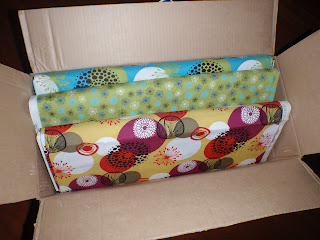 and now I have to go to bed - I spent the last couple of days quilting a quilt top for a client on the longarm - I used Aurifil thread for the first time and it broke too many times to mention - drove me absolutely insane and I spent a lot of time unpicking and or sewing ends in......don't think I'll be using it again......good job my bestie was helping me otherwise I think I would have done a Basil Fawlty and wallopped the Gammil!
Posted by Shocking Hocking at 23:48