I think I started this quilt about May last year - I didn't start to blog about it until August last year when I had nine of the centre hexagons completed - they're all done by hand so they did take a little while.

Once I had what I deemed 'enough' hexagons (and had, in the process, gathered enough French General fabrics to start my own Empire) I machine stitched them together with little isoceles triangles.

A border was next - a plain one in the same triangle fabric, then a dotty one before the hexagon border (have to say this border was a right pain - it moved and wobbled and in the end I had to take off about 1/2" from each long edge to have it resemble a straight - enough line!)

Next came a wide border - this one the glorious rich turkey red and a fleur-de-lis pattern from the latest French General range.

Quilting was next - the back is a very large piece of French General backing from Hancocks - no pieceing in sight!.

I loaded it onto my longarm and quilting feathers in the large border along with a meander filler, stitched in the ditch around the remaining borders and inbetween the hexagons with a loopy filler I made up as I went along (truth be told I stuffed up the spiral I wanted to use and instead of unpicking, just went with the stuffed up version - I quite like it and will use it again).  Thread used was red or cream, depending on which bit I was quilting.

Off the long arm and onto hand quilting - some shadow quilting of the feathers with red perle and some hand quilting in the hexagons with a creamy beige perle - big stitches because I like them and minimum stitching because I didn't want to overwhelm the patterns.

Finally, a little more machine quilting - this time using my domestic machine - and creating crosses through the border hexagons and it was time to do the binding.  Apart from a small piece of contrast (which you can vaguely see on the top left in the photo above), the binding was the same as the last border and I stitched this down by hand.

I've yet to put on a label and then it'll be posted off to a very special person in the UK - I think  know I'm a bit sad this is going.  I've enjoyed making it and I'm a bit sad I won't see the special persons' face when she opens it - hmm, maybe I should make her wait until we're skyping?? 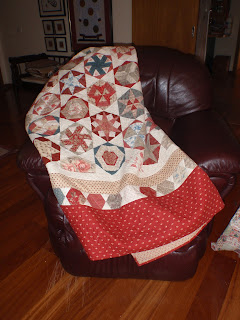